Family owned and operated since 1973 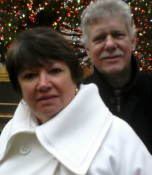 Dave Radovich started out as a tenor saxophone player in Seymour, CT before picking up alto sax, clarinet, and flute. Ultimately, he became a clarinet major at West-Conn, where he met Cindy, who became his accompanist.  Dave is a true woodwind doubler, professionally playing all single reed instruments, as well as flute, piccolo, alto and bass flute.  After college, Dave became a band director and apprenticed at an instrument repair shop near his home town every summer.

Cindy Dean Radovich is a classical pianist from Putnam Lake with a jazz pianist for a father, the late Rudy Dean.  Rudy and Cindy's styles of playing were at opposite ends of the spectrum - Rudy loved to play jazz standards, while Cindy preferred to play Chopin and Beethoven.  After college, Cindy and married Dave, and started her career as a chorus teacher.  Cindy took summer stock jobs as music director and rehearsal pianist throughout Connecticut and Mass.

Rudy Dean (1923-1993) was a jazz pianist, singer, and guitarist born in Bronx, NY.  He was known for his distinct piano style, modeled after Errol Garner and Carmen Cavallaro, and a swooning voice compared to Bing Crosby.  Rudy learned piano from his mother, Jesse, and had an incredible talent for committing music to memory quickly.  Rudy inspired his daughter, Cindy, to study piano and pursue a career in music.
Radovich & Dean Music began in 1973  with David Radovich, his wife Cindy Dean Radovich, and Cindy's father, Rudy Dean.  After several years of teaching in public schools in CT and MA, the couple moved to NY to open the music store with Rudy, who was a well-known jazz pianist from the Bronx.  They first opened shop in Lake Carmel on Rte. 52, then later moved to Seminary Hill Rd., before settling into the store's current location - in the Hamlet of Carmel.

After repairing instruments, and teaching lessons, Rudy and Dave frequently performed together at jazz and supper clubs, weddings, and other formal events.  Cindy taught music in the Brewster Schools for 30 years, while maintaining a full schedule of piano students after school at the store.  Dave is the store's primary repair technician, teaches woodwinds, and performs regularly throughout Putnam and Westchester.  Cindy has been music director and rehearsal pianist for dozens of musical theater productions in the area. Today, she operates the store with Dave and maintains a packed teaching schedule in the afternoons. Their daughter, Tiffany, an oboe and English horn player, operates The Studios - the lesson department, located at 7 Fair Street - just around the corner from the retail store.

Forty years later, our mission remains the same: To provide music students and professionals alike with quality instruments, accessories, instruction, and repair service.  It is our background as professional musicians and music educators that sets us apart.